The Artist of the Month of July is Conrad Ventur, selected by Eric Shiner of the Andy Warhol Museum. Conrad is currently featured in Greater New York 2010 at PS1/MoMA, and last spring, Momenta Art exhibited his Screen Tests Revisited. For his AMC print, Conrad produced a snapshot from a live poetry reading by Taylor Mead. Taylor Mead starred in several of Andy Warhol's films, has been the subject of a documentary, and exhibited his poetry in the 2008 Whitney Biennial: Day for Night. 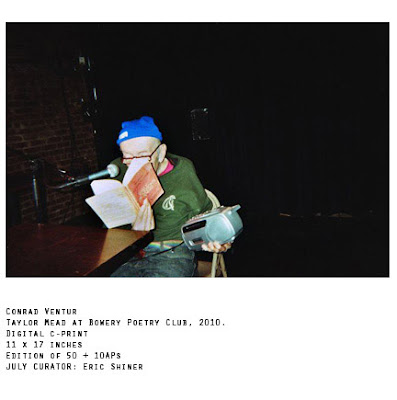 CV: The man in this photograph is Taylor Mead, the famous Beat Poet and underground film star. Every Monday he does a reading at the Bowery Poetry club. A couple times a month I go see him perform at 6pm. I arrive early and get a cup of coffee and a cookie. I sit next to Taylor at the bar before he goes on, and I share the latest news with him. He's always got a cocktail in hand.

He usually does the same-ish kind of performance. He walks up to the stage and situates himself at a little square table in the middle of a spotlight. He reads from an old Emily Dickinson book. Usually he'll insult her between sentences and trail off after about a paragraph in disgust, tossing the book to the side and then digging through his bag in search of some poetry of his own to read instead. "Stupid bitch," he grumbles. Taylor usually reads his favorite poem, the one where he describes getting raped by another boy when he was 12 years old. The audience claps and howls with laughter as Taylor makes it sound sexy and exciting. It's unexpected for them to hear an 80-year-old man perform like this. A Charles Mingus track blasts from a little cassette player that he holds close to the microphone between phrases.
His audience is mostly the early-arrivals for the 'drag bingo' night. Usually half way between his performance, people begin pouring in for the game that will begin once he is done with his show. While he reads the poetry he'll interject some comments about how irritating it is that they're not really there for him. "I'm the biggest thing on Google. I'm famous," he squeals. I think he's great. I stay for a while after and we do a few rounds of bingo together. I've never won anything, but he won a little hand bag a few months months ago. A Hannah Montana vinyl purse. Sometimes he buys me a drink. "It's on Andy Warhol," he says. 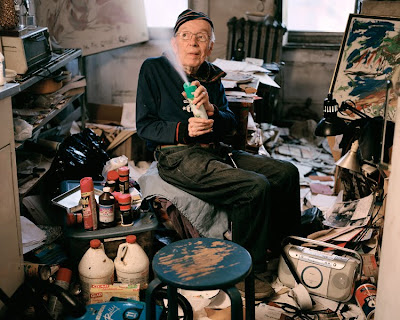