Nicht What I Hertha

Christopher Eamon, Director of the New Art Trust, San Francisco, and Curator of the Kramlich Collection selected Berlin-based Matt Saunders for the June edition of the Artist of the Month Club at Invisible-Exports. Here, Matt talks about the process behind his Hertha Thiele, a silver-gelatin print on fiber paper, each of which he printed on his own, and each of which responded to the homemade conditions in a unique way.


MB: Did you select the image of Hertha Thiele from a frame enlargement? For an actress now admired for her androgyny, she looks distinctly feminine in your image. I even think of the iconic qualities of Girl with a Pearl Earring. 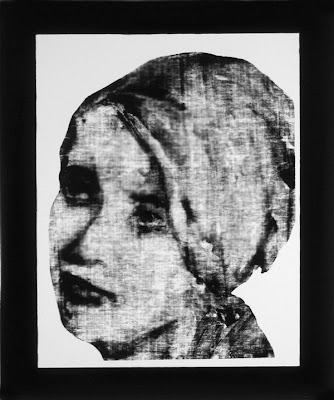 MS: It's actually from a collectible publicity image -- a "cigarette card" -- in fact, I've rounded up several based on this particular photo. In some, it's straight black and white, in others crudely colorized. She's clasping her hands in her lap and wearing a broadly striped scarf, which I can only imagine was meant to look exotic. I'm not 100% sure she isn't dressed for a role, but my guess is that this is really a celebrity photo -- of Hertha Thiele, but not Hertha Thiele in character. As I said, it's one I've collected in duplicate, wherever I could, because I'm moved by it as a portrait. It's oddly lovely. And... you hit the nail on the head: it's almost uncharacteristically feminine. I'm drawn to that, interested in that.

MB: You've adopted Hertha as your subject for numerous exhibitions, including a show last year at Andreas Grimm and even more recent shows at Harris Lieberman in New York and the Renaissance Society in Chicago – the latter, your first at a museum. Do you feel kinship with her? How do you identify with her?

MS: The simplest statement is that I'm a fan. I was that first, and she entered my work later. I love both Kuhle Wampe and Mädchen in Uniform, which happen to be Hertha Thiele's first two films. She's wonderful in them! Both of these films I had seen before moving to Berlin, so, in my mind, she was one of the great German and Weimar-era actresses. Instead there's little trace of her. After those films, she clashed with the rising National Socialists and made her way to Switzerland, where she couldn't work as an actress. Almost by chance, she ended up back in East Germany in the 1960s and acted, mostly on television. Later, she was half-rediscovered, both by the West, in large part for Mädchen in Uniform, now seen as a groundbreaking proto-lesbian film; and the East, for her credentials as an associate of Brecht. A television special on her was called The Heart on the Left Side. She died in 1984. 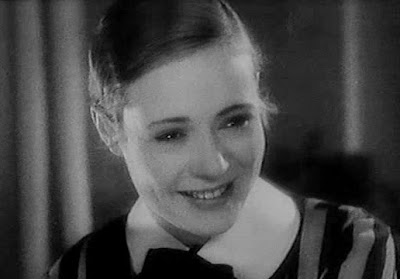 I became fairly obsessed with finding images of her, and especially with this thirty... almost forty year gap in public images. There are many pictures of her in her 20s, and fewer but still some later in life. This gap came to feel like a huge unconscious in her biography. I like that she is not exactly a tragic figure -- like so many of her generation -- but rather one who was buffeted by her times. My search for images of her coincided with my life in a new city (Berlin)...thinking about the place and the history. I realized at one point that she had haunted my work for several years, and I tracked down a copy of the little biographical book published (and soon out of print) in 1983 for the Berlin Film Festival. So I remade that book with my searching and my versions of pictures of her. And that turned into a big project where I drew (with ink on mylar) the "negatives" for most of my collection of Hertha Thiele images. Sort of like turning the archive into a tool kit - but passed through my trial and error and hand, trying to remake these things, and I could use these negatives to make an installation, like an ersatz picture gallery. When shown, as much as it was trying to portray her, it was showing my own relationship to this archive - the fits and starts and gaps, and of course the distance.

I'm not sure how to come back and answer your question about kinship. There is certainly some identification. Also, as I've done before, I've made her a starring character in my work for long enough, that, in a way, she's becomes almost emblematic of that.

MB: Simultaneously capturing your keen interest in Hertha and your generational distance, the process you chose is compelling. Moreover, it places you within the steadfast history of painting photographs, photographing paintings, recreating creations, and regenerating across media. A few examples might be Gerhard Richter's paintings of press photos, Thomas Demand's photos of paper sculptures of photos, Warhol Disasters, and the Pictures Generation, especially Richard Prince and Sherrie Levine. Why did you choose to reproduce a negative by painting it? That adds new levels of mediation, and more specifically, brings "the hand" and its inimitable qualities into the work.

MS: It was a natural step. I'd been moving my paintings to have a more and more seamless surface (painting on the backside of mylar, and so on) and was always wanting the work to be embodied and embedded in the materials. I liked it best when it was somehow mysterious where the image, and even more the facture, was located. The first photos I made were a very simple thought. I was showing a film, and wanted something for the wall outside, like the lobby cards in an old movie theater. I'd collected a set of images, from all kinds of sources. I wasn't satisfied either with idea of re-photographing them or making simple drawings-from-photos, yet I wanted them all to look like press packet - in the same format. I thought: "If I only had the original negatives…" So I just decided to make them. Those were contact prints -- simply putting the drawing (ink on transparent paper) on a piece of photo paper and turning on the lights. 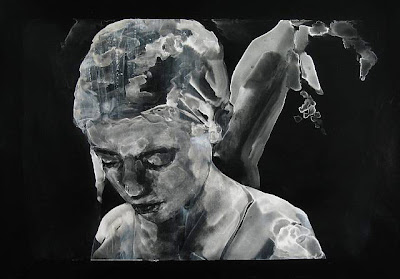 Those precedents you mention are all people who interest me, and I think at the center of what I do is a similar attitude towards media and an interest in translating between different materials and different modes. So of course the possibility of the photos appealed to me. As you say, every translation adds levels of mediation, and I prefer when these are transformative or inscribe themselves in the image. I'm not invested in the idea of "The Hand" as something privileged, but it's got its good days, and it's one thing I can bring to bear on the image. Anytime you change the tool it can do something.

That's another thing which has driven my work: Getting frustrated with habits, and trying to set handicaps or other ways to trip up. Trying to imagine what negative would make an image -- inverting the values in my head as I drew -- felt challenging, and the outcome at times surprising. So I really got into working this way. Then using the enlarger to make blow-ups... changing the scale of marks... allowing the ink to behave in its own way, and then the material becomes an image of the material... It seemed like the loop -- from my original photo source (already captured from a stream of moving images, wrenched into a still) THROUGH painting and back to a seamless photographic space -- was a natural, and yet still studio-based, life-cycle for the pictures.

MB: As you mentioned, to loop from the original photo source, through painting, and back to a photographic space is a cyclical return for the image. It also uproots the image from its source - the true, "biological" negative - and transplants it to your analytic estimate of that negative. Thus, it is less of an appropriation, in the end, then a reclamation - or even adoption. You reclaim the title of progenitor. That is a very loaded process for a very loaded figure, someone who navigated through poles of power, by refusing the Nazis and exiling herself in neutral Switzerland; and whose legacy will be posthumously revised and reimagined - a queer icon, a screen icon, an anti-fascist heroine - throughout the future.

MS: "Progenitor" is an awfully loaded word, and I'm not trying to make any big claims; though on the other hand, it's absolutely legitimate - and nice - that you can talk about what is, or could be, read into Thiele's legacy. ("Legacy" already seems like an overblown word. She's a mostly forgotten minor star, who I happen to be charmed by). This balance between the private life and the public figure, who inevitably is more and more abstracted, more and more a screen for projection, is certainly on my mind. One thing to say, maybe, is that I've never separated images from their materials (even if those are immaterial, digital, etc.) but I am extremely interested in translating these things. Iterations. She's reconstituted after time.

This particular image has a long and involved cycle. First, it's a source photo I've used many times. This edition actually started with a painting - oil and ink on mylar - which was painted in positive... that is, meant to be a painting, not a negative to make pictures. It was part of series of fast paintings I made, all variations on that image. I made a contact print of that painting, which of course came out negative, then used that paper print as the "negative" in the edition. So my brushstrokes in the painting, etc., are part of what's being adopted, they're already pretty far back in the history of the image.
Posted by Michael Bilsborough, AMC's head blogger, IE artist and all around cultural pundit. at 3:31 PM