Invisible-Export's Artist of the Month of May is Ei Arakawa. Ei was born in Japan and is an alumnus of School of Visual Arts, the Whitney ISP, and Bard College. Included in Greater New York 2010 at PS1, he was selected by Anthony Huberman, chief curator at the Contemporary Art Museum, St. Louis.

MB: First, can you tell me about the origin of the image used in your print? Is it a photo documenting a performance? 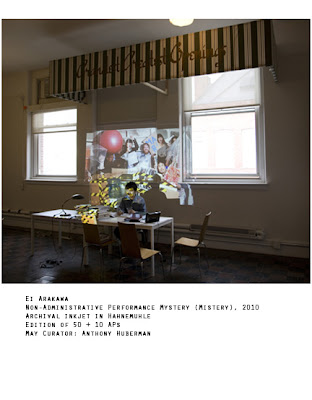 EA: It is a staged photo. Not a performance documentation. I arranged the photo shooting in my installation at PS1 especially for Artist of the Month. There is one projected photo (MB: by Alec Holst) within this photo that is another staged photo shooting with some of my roommates. In my performance, I almost always work in a group, so I staged my "grouping" in the photo. But, we never did a performance together with these roommates, except few of them. In the photo, in front of the projected photo, I am a quasi administrator of the group performance. 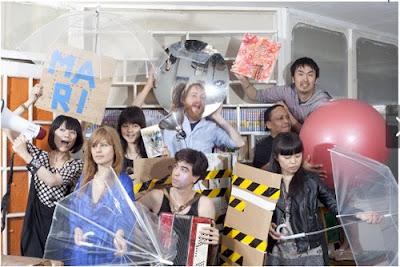 The awning above says Greatest Grandest Openings. It's the collaborative work of Grand Openings, in which I've worked with four other artists since 2005. At the PS1, I come to this installation as often as possible, and do a open studio for Grand Openings, showing the documentations of performance, as well as working on the book we are planning to publish later this year.

The font we used for the awning is the famous label inspired from Harrods, the old department store in London. It's like a grand shopping sign. I like how the awning takes over the conference room of PS1, where they have regular meetings to discuss administration of the museum. The installation is always open to public, but at the same time it's hidden on the side of the Greater New York show - but when the people are there, they are quite interacting with me talking for a while. 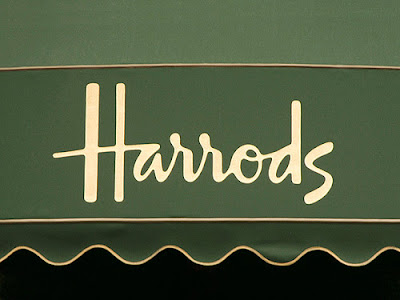 MB: How would you describe the interactions between you and visitors in the conference room at PS1? Do many of the visitors actually speak with you? Or are most of them too shy? If they do speak, what do you discuss with them? I ask because the conditions of this ongoing open studio seem to be very open-ended, so I wonder what patterns might begin to emerge.

EA: We don't discuss anything.

Basically, I work there to finish a Grand Openings book. I hope that the audience sees me working. Though, the audience keeps interrupting my work. I hope I can finish some of the work...

Also, I hope all Grand Openings members sometimes have a meeting there. Meanwhile, I am adding some extra display materials on the shelf. I am adding a video documentation of Grand Openings performance from Sweden soon. I feel sorry that the audience come to my space expecting some performance happening ... so I offer them a candy.

MB: Do you feel sorry for the visitors because you think you are disappointing them? Maybe they should be more wary about bringing their expectations to an exhibition. Either way, if the goal really is to finish the book, why not close the door behind you? Why let anyone in at all? 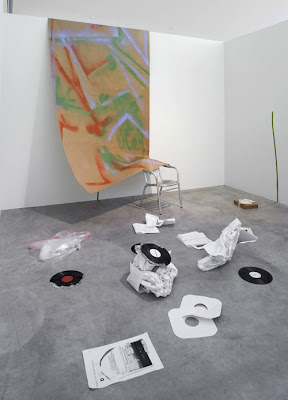 EA: Yes, I think they are disappointed ... I can close the door anytime, which PS1 does when I am not there ... but the conference room is also PS1 staff's kitchen supply, where their fridge is located ... so, many staff come there around lunch time.

It is also interesting how some audience trespasses and comes in seemingly not an exhibition space ... most people just peek inside from the hallway. They think I am an office worker, which I am. Then, I say hello to them, and introduce little bit about Grand Openings when I feel like ... I also tell them actually it is not really anything here, but an awning.

Although when my friends came, I took a group photo with them. I might display that later ... Overall, it is nice to have an office for Grand Openings, so I can work differently than being at my home in Bed-Stuy...

The book could just be an ostensible reason for you to be there, though it does sound as if you hope to complete it. What will it include?

EA: I am making a book because I got funding from Munich artist residency. It will be a series of documentation materials from the performance collective Grand Openings, and commissioned short writings by numerous contributors who invited and worked with Grand Openings.
Posted by Michael Bilsborough, AMC's head blogger, IE artist and all around cultural pundit. at 7:42 PM