The Artist of the Month of September (back to school!) is Berlin-based Dean Sameshima, selected by artist Terence Koh. Dean's silkscreen print, Untitled (Pig) is a near life-size image of "one fine moment" in his life. 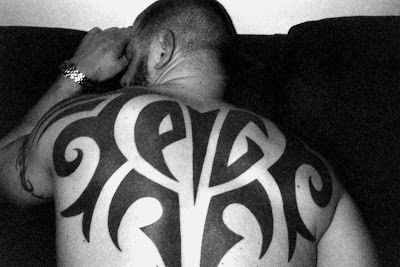 MB: Why would anyone call himself a PIG, especially so permanently?
DS: Why not? This guy obviously is a pig bottom and damn proud of it.... and he definitely proved to be so when he arrived at my apartment. The thing about tattoos and one of many reasons why people get them are to announce something or communicate a message on their bodies. Personally, I don't and can't define my own sexual position and would not make that kind of commitment on myself. My tattoos, like many others, all come from something very very personal, each one has a meaning to me and about me, not so much about sex. Sex doesnt really serve that much importance in my life.
MB: It doesn't serve much importance in your life, though you do make a lot of art about sex and desire. About the commitment to a "sexual position:" do you avoid that commitment because you personally don't want to be confined to one category? Or is it that you don't believe in the simply top/bottom dichotomy?
DS: It is important to an extent. but not so much where it would involve "branding" or marking myself permanently. I find my sexual encounters are mainly for me. But sometimes, I will take it a bit further, and sometimes finding myself, especially since moving here to Berlin, to explore the power dynamics and how much i can take my role and use it to my advantage and where the other gives consent as well...they submit to my requests/demands. I like that a lot. I have explored sex in the past but never in a straight forward/obvious manner. Desire is my drive and what I like to explore in my work. I like the space between desire and gratification.
I do believe in a top/bottom dichotomy...and I do get off more on the position of the top, but I'm not opposed to the role of a bottom or just being versatile. I myself don't want to be exclusive to just one....for now at least. 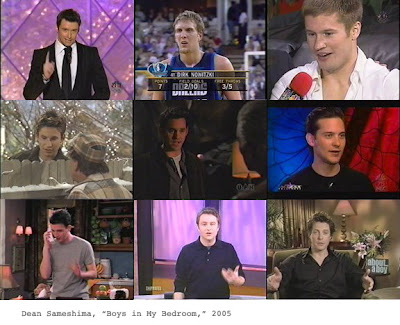 MB: Being the top is as psychological as it is physical. Even while on top, are there ways you can feel compromised or subverted, in any sense you can imagine? Here are some examples. What if the other person is more powerful than you, like a bull bucking a cowboy? What if a long-term partner knows how to bait you with something you can't resist, like a shrewd seductress, which heterosexuals would identify as being pussy-whipped? What if the other person just needs that one thing from you, and not the rest of you? The first image I recall in this train of thought is the scene in Bad Education, where Ignacio/Zahara has sex with Enrique while Enrique is passed out. Even though he's bottoming, he is still master.
What I'm asking is this: in sex, can there be an absolute top? Can the tables be turned?
DS: There has always been this theory that the bottom is actually the one in control, it's been written about a lot. Some of the guys are most likely stronger than I, and that's part of the thrill for me, when they submit and do as I say and what I physically suggest. The guy in the silk screen is about 6'3" and worked out!
There is someone who has been a regular with me for a while, and he does get the upper hand on me when he doesn't respond or reply to me. It can drive me nuts and I have to then find a substitute, and it's just not quite the same. Yes, the tables can be turned psychologically.
MB: Do you always photograph your sexual partners?
DS: I usually do not. Only when there may be a hint of possible exhibitionism and fetish related do I think about it. Vanilla acts/behaviours do not excite nor inspire me very much.
MB: Is your sexual life much different in Berlin than it was in L.A. Is it easier to meet people? Do you have to contend with the stereotypically aloof mannerism of a German?
DS: I feel much more free and free to be more open with my sexuality than in America by far. I don't think it's easier to meet guys here. I really don't find the stereotype of an "aloof German" true here, not anymore than the silly aloof fag in L.A. or New York, or elsewhere. In fact, I have found German guys, in general, more upfront and to the point here.

MB: Are Americans uptight prudes? Is that why you feel more open in Berlin? At a recent party, I was telling a visiting German about my monogamous relationship. He said, "Oh, that is so American."
DS: I think for the most part, yes. I was born and raised American, but considered myself a sexual outlaw. Monogamy is a discussion I have had with many people here, both American and European. Seems to me, when two people state they are monogamous: good for them. But in reality, I know of lots of people in America who say that, yet they cheat on the side and try to keep that a secret Lots of people here I know are in open relationships, especially gay men, and that's great. Why lie about wanting sex with others; why deprive yourself of pleasure? I think gay men, or anyone, should not have to submit to some heterosexist ideal. It's just not for everyone and doesn't work for everyone.
MB: For those of us in the U.S., same-sex marriage is an immediately relevant topic. Do you think pursuing same-sex marriage is a worthwhile effort?
DS: YES, I certainly do! My best friends, 2 different couples, got married before the ban in late 2008. I believe that they and others definitely do deserve the same rights as opposite sex marriages. Same-sex marriage has nothing to do with sex and sexuality for me, it's about equal rights for all. Personally, I don't see myself ever getting married, but that's just me and what I feel right now.
MB: I don't know what people say in Germany, but in the U.S., I cringe every time I hear about "the homosexual lifestyle" or "the gay lifestyle." Does that mean weeknight orgies in gym saunas fueled by poppers and dance remixes? I always think that it must be a euphemism for sex acts. In Berlin or in L.A., have you ever felt in synch with an external, uniform "gay lifestyle?" If so, is this photo a document of your "lifestyle?"
DS: I cringe as well. I don't feel in sync with any defined lifestyle, in fact, I have tried constantly to just create a life that is comfortable for ME. The photograph used for the silk screen print, is a document in one fine moment in my life.
I think terms like "the gay lifestyle" and such were/are terms made by conservatives and just plain ignorant folks who actually know very little to nothing about homosexuality and sexuality in general. They use these generalized terms for derogatory means. To me, weeknight orgies in saunas are fine, and if you like dance remixes to go with your poppers: fine. Some people gay and straight do that. Good for them if they are having fun and not harming anyone while doing it.
Posted by Michael Bilsborough, AMC's head blogger, IE artist and all around cultural pundit. at 11:17 AM