The Artist of the Month for March 2010 is Jorge Macchi (b. 1963), who lives and works in Buenos Aires. He was selected by Jens Hoffman, director of the Wattis Institute for Contemporary Arts, and his archival inkjet print is Film Noir, 2010.
MB: The clippings you've collaged together appear to come from Spanish-language newspapers. Did you select the papers for specific characteristics, such as date, region, or writer? Or did you draw them randomly? 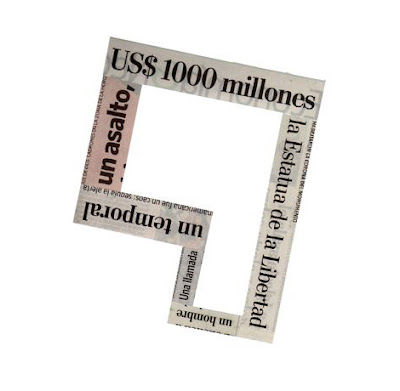 JM: The clippings come from Argentinian newspapers. They are words taken out from articles' headlines. I didn't select them for date, region or writer. First of all: the words are nouns. And second: they are nouns that could create a synopsis of a film: who? how much? where? what? are the questions that the words try to answer.
MB: Behind every crime is a motive, coupled with an opportunity. Does your print, Film Noir, tell a story? I see the Spanish words for "assault," "a man," and "a billion dollars," so I'm tempted to link them together as a crime story.
JM: They are placed in a kind of loop as to create the feeling that the story could start in every word. The inclusion of the Statue of Liberty reminds me of the end of Hitchcock's North by Northwest with the actors going around the heads of the presidents at Mount Rushmore. 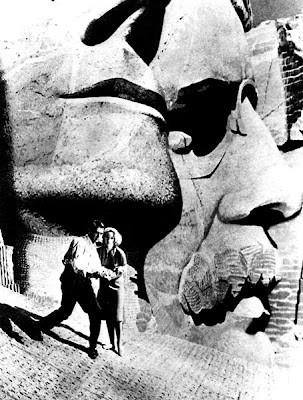 JM (continued): But what is more important for me is that in fact the words are clippings from real newspapers creating bridges between fiction and everyday life. If you see carefully almost every clipping has a subtext related to a story that is far away from the possible plot of the unexisting film. For instance the clipping of the Statue of Liberty says in the small text: "the crown of the monument was reopened."
MB: Is there room for images in this work? Why not include newspaper photos and graphics within the "story?" I'm thinking of Warhol's Disaster pieces, which harbor several dimensions of meaning by combining images and text. What effect would images have on the piece? 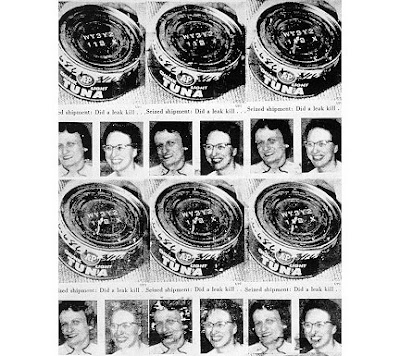 JM: The film exists just in your imagination. This is why I dont include images. On the other hand, there is an image: this loop made out of cut outs, and several formal elements as contrast, colour, transparence. In order to allow imagination to develop from the words, I need to work on formal aspects such as contrast, colour, transparence, which don't go in the same sense as the images the spectator could produce.
MB: Some of the drawings on your website look diagrammatic, which in the context of print news, endows them with some journalistic qualities. If images could find a place in this news loop, would any of your drawings be candidates?
JM: I insist on this point: other images than the collage itself would go against the film.
MB: Throughout the genre we call "film noir," we find in almost every film a "femme fatale:" Barbara Stanwyck in Double Indemnity, Mary Astor in Maltese Falcon, Uma Thurman in Pulp Fiction, Sharon Stone in Basic Instinct. The story you set up for the viewer to complete seems to omit the femme fatale. Is she hidden between the lines? Or do you have a different motive?
JM: The femme fatale is the Statue of Liberty - or she is the place where the action could be developed.
MB: That sounds subversive. The femme fatale is often seductive, shrewd, and dangerous. The Statue seems to be none of those, except seductive, though more "welcoming" than "seductive." She is an icon, an immigrant, and her monumental statement is:
"Give me your tired, your poor,
Your huddled masses yearning to breathe free,
The wretched refuse of your teeming shore."
How do you reconcile the role of the femme fatale with America's Mother of Refugees?
JM: Complete freedom can be seductive and dangerous. 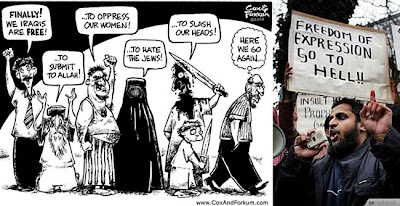 MB: I can see from the work collected on your website that many of your projects are very responsive to their immediate surroundings. If you could place Film Noir - at its current scale or larger - at any site in the world, and for any eyes in the world, where would that be? On Wall Street? In Dubai? The Statue of Liberty?
JM: It is a film shot in NY and Buenos Aires, with actors speaking in Argentinian Spanish.
Posted by Michael Bilsborough, AMC's head blogger, IE artist and all around cultural pundit. at 9:49 AM